This video is part of a great instructional series (Rise Up ultimate) that we’ll be watching more of as a team over the season. Few know the science and mechanics of ultimate like coach Ben Wiggins.

We watched this video today in practice and I thought some of the players might want to share. This is Beau Kittredge, one of the best players in the history of ultimate frisbee, jumping over an opponent. Please note: this is not a regular occurrence in ultimate and speaks more to Beau’s killer athleticism more than anything else.

I also showed this picture of a summer league team that I captained when I lived in Boulder, Colorado back in 2002. If you look, you’ll noticed Beau standing on the left side of the image (second from the left). I’m standing in the middle holding up the disc and the number 1 symbol. It was Beau’s first summer in Boulder, no one knew who he was, and I ended up drafted him because he was tall (since I was also new and didn’t know anyone in the draft, I just picked the tallest available choice every round). Of course we won the tournament that year. 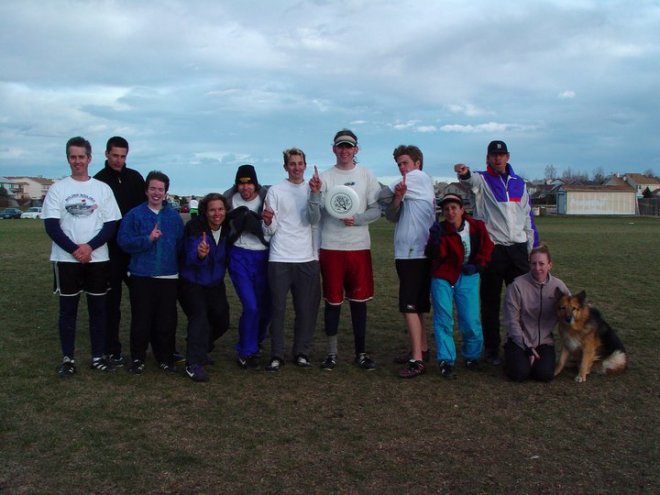 In ultimate, if a player performs a Greatest, he or she jumps into the air from in-bounds and catches and throws the disc back into the field of play in one motion before landing out of bounds. If that disc is caught by the player’s teammate, they keep possession of it. It’s awesome to see and even cooler when it leads to a score. Throw in a flying layout and you have this gem of a highlight:

There is a great ultimate summer camp being run this summer through the Falmouth Rec. Department. Click over to read more about it and to sign up.

The two coaches running the camp, Chloe Rowse and Noah Backer, are both locals (Chloe is an alumni of the Falmouth Ultimate program and Noah played in Cape Elizabeth) and have achieved Big Things at the collegiate and nationals level of play. There is a limited number of spots available, so don’t lag in signing up.

Chloe’s dad Rob is one of the head coaches with the high school program and created this highlights video of Chloe and her teammates at Colorado College. Chloe is the tall blonde rocking the long ponytail.

What this video lacks in image-resolution, it makes up for in sheer-awesomeness!

Thanks to coach Rob Rowse of Falmouth Ultimate for sharing this one with us!

Another exciting game to watch for homework this week.

Another great game to watch.

The players have been given some ultimate homework this week—they all need to go for a 20 minute jog and they need to spend at least 20 minutes watching this game of professional-level ultimate frisbee (you’re invited to join them in watching).

The first pull is around the five minutes mark, which you can skip to if you want to jump over the standard pre-game production.

Just in case anyone needs a video to show a prospective player what this sport of ours can look like, here are a couple of good ones. The first shows what a high level full length game looks like while the second is a bit flashier and focuses on a lot of diving layout blocks and catches.